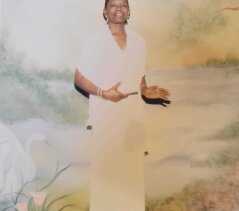 Anita Christiana Stukes was born to the parentage of Christopher George Williams and Adina Skinner on September 29, 1944 at San Fernando General Hospital in San Fernando, Trinidad and Tobago. She grew up in Bamboo Village in the city of La Romain, where she completed her primary and secondary schooling. Being the adventurous person that she was, she moved to Rome to further her education, and became an au pair. Years later, God guided Anita into the United States which became her permanent home. Here, she furthered her education in nursing and worked in dietary services at Beth Israel Medical Center while raising her three beautiful children: Jennifer, Sean and Kendall.

She was very passionate about helping others. She had a zest for life, and many will tell you that she enjoyed going to fetes, especially Carnival. She also loved fashion, horticulture, and interior design.
Anita was a very hard working and caring woman. As a servant of God, she became a member of the Church of the Atonement. On October 18, 2021, God reached His hands from heaven and called her home. She will be truly missed by her family, friends, community, and a host of other affected by this loss.

To order memorial trees or send flowers to the family in memory of Anita Christiana Stukes, please visit our flower store.