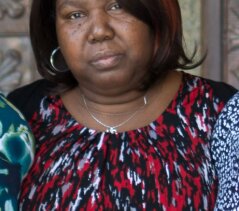 Dear friends and family, we have gathered here to assist in the final voyage of our Mother to her creator. We praise the Lord for having given us such a kind, loving, admirable Mother for this earthly plane.

Our Mother, Anne Noel, née Anne Marie Pierre Louis, was born in Borgne, Haiti on November 4th, 1960. Her parents, Francoise Alouidor and Jall Pierre Louis welcomed her into a large family with several other children. As a school age child, my mother moved to Cap-Haitien to go to school at Saint Rose De Lima, founded by the Sisters of Saint Croix, where she began building a relationship with the Lord.

Once she completed her primary education, she wanted even more out of life and as a result our Mother emigrated to the United States in 1980. In this life transition, she met our Father, Theoma Noel and soon married him in 1986. With this union, our Mother’s family grew even larger, with her gaining several new siblings. In that year as well, she gave birth to their first daughter, Sasha, more affectionately known as Lexi.

Our Mother’s ambitions and good work ethic lead her to work as a maid during the day and to attend nursing classes at night. She completed that degree, all while raising her first child and began her career in the health professions. In 1997, she gave birth to their second daughter, Thelma, more affectionately known as Lisa. In less than a year from that point, she and her husband purchased their first home together.

While our Mother only had two biological children, that did not stop her from adopting other children along the way. There are countless numbers of nieces, nephews, and family friends that found a home with our mother over the years. She always had a hot meal, a soft bed, and comforting words for those that were in need. She had a large heart and loved everyone around her so openly and freely.

Anne Noel is survived by her husband Theoma Noel, her loving and devoted daughters, Sasha “Lexi” Noel and Thelma “Lisa” Noel, and her three cats, Dante, Nero, and Lady. Over the course of her life, our Mother touched countless people’s lives with her kindness and spirit of giving, so many that it would be nigh impossible to list them all here.

Our Mother’s legacy is one of unconditional love, to have hope even in the midst of adversity. To everyone around her, she was a beacon of optimism, in how she was always able to find the silver lining in any situation. She will be sorely missed by her family and friends.

Please keep these additional family members in your prayers as well:

To order memorial trees or send flowers to the family in memory of Anne Noel, please visit our flower store.