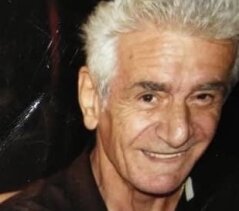 Anthony was born in Brooklyn Ny on January 13, 1938 to Susie Rueck. Growing up he went by the Nickname Rookie but the past 10 years his daughter Ro gave him the name Cookie! He is survived by his 3 daughters Eleanor, Rosemarie and Susan! He was a beloved grandfather to Nicholas, Christopher, AJ, Giovanni and his sweetheart Nichole! He also survived by his Sisters Mary and Roseann! He was a beloved Uncle to Frank and Theresa and many other nieces and nephews.

Anthony’s drs called him Superman he was a 3 time cancer survivor and beat death many times! He was a man of Steele always defeated the odds! He was a hard working man his whole life! He was an amazing father and grandfather. Everyone who met him loved him he had an amazing sense of humor and will be missed dearly!

Anthony is finally with his beautiful wife! For 24 years he missed her so much! Towards the end all he spoke about was missing her!

To order memorial trees or send flowers to the family in memory of Anthony Rueck, please visit our flower store.