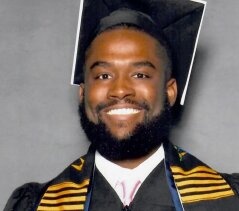 Brian Yves-Marie Gabriel passed away on Thursday, January 6th, 2022 at 10:55pm at the tender age of 25. He was the second son, born of Ernest Gabriel and Jude Duverseau Gabriel on Monday, August 12, 1996 in Fort Lauderdale, FL. He received his full rites of initiation, including his baptism, first communion, confirmation and his last rites in the Roman catholic faith.

Brian completed his entire education in the state of Florida. He went to Pinewood Elementary school where he played baseball and soccer. Then he went to Westglades middle school, then Nova high school where he graduated in 2017. In high school, he ran track and field, played basketball, he was in the school band where played the saxophone. He graduated high school with honors in academics.
Leaving home immediately after his high school graduation, Brian went on to attend the Florida Gulf Coast University where he joined a myriad of clubs such as the Black Student Union, the Haitian Student Organization, and he was an Advanced Coordinator on campus. He became a big brother in the Big Brother Program, as well as a tutor for both young students and college students. One of Brian’s proudest accomplishments in college was pledging Alpha Phi Alpha, the first intercollegiate historically African American fraternity, in the Upsilon Sigma chapter. He was the Stroll Master and Step Master in his fraternity. He graduated on December 14th, 2019 with a Bachelor of Arts degree in Interdisciplinary Entrepreneurship Studies from the Business Department. He moved back home after graduation and started a career as an assistant manager at Enterprise, a music manager in the rap genre, and an aspiring professional screenwriter. His last career choice was as a teacher in Ramblewood Middle School, in Coral Springs, FL.

He is survived by his parents, Ernest Gabriel and Jude Duverseau Gabriel, his siblings, Cliff Gabriel, Luidzy Gabriel, and Yashua Gabriel, and his paternal grandmother Odette Gabriel. Brian was a member of a large family network of 14 living paternal uncles and aunts, and 2 maternal aunts and uncles. He also has 45 paternal cousins and 3 maternal cousins.

Brian was full of joy and passion for life. He enjoyed eating good food, going to restaurants and buffets. He loved playing basketball, watching the NFL and NBA and never missed an episode of First Take or Undisputed. He loved music passionately, with his favorite genres as rap, RnB, Haitian Konpa, and others. Apart from his father, whom he considered his life model, his role models were Kanye West and Kobe Bryant. More than anything else, his family remembers Brian as a very compassionate man who genuinely cared for others. He loved his family very deeply. He was nice, friendly, always exhumed positivity and inspired a positive life outlook from others. He was a selfless person, whose kindness was reflected in every area of his life, including his volunteering and the youth group at his church, his tutoring, his influence in the big brother program as well as with his line brothers. He loved to have fun, dancing on any and every occasion and making others laugh. Brian was talented and smart. He used to be so annoying with using quotes in random situations to make everything into a lesson. But, he lived every moment of his life based on one quote by Henry Ford to the fullest: “Whether you think you can or you think you can't, you're right.”

Brian’s family and friends were the first witness to his strength, determination and his willpower with every decision he made. He showed extraordinary courage in the last moments of his life. He never complained through insurmountable pain through a very rare and aggresive cancer he suffered from at the age of 23. He was fighting for his life and yet, he was ready to face every step as he underwent multiple surgeries. He passed away 2 years after his diagnosis. No matter what, his answer was always “I’m okay” until the last minute, when he couldn’t speak anymore. And we know that he is okay where he is right now, watching over his family and friends.

Immediately following the viewing, there will be a funeral mass at 1pm at Our Lady Queen of Heaven Church on 1400 S State Rd 7, North Lauderdale, FL 33068.

Guests and family members are then invited to the burial services after the funeral mass at Serenity Funeral Home. A simple libation will be provided for family and friends at 5651 NW 107th Ave Coral Springs, FL 33076.

To order memorial trees or send flowers to the family in memory of Brian Gabriel, please visit our flower store.