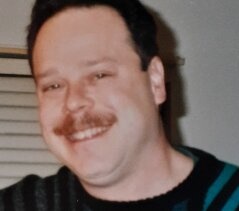 David Charles Schlesinger (“Dave”) was born on October 5,1960 to Leonard and Thelma Schlesinger (both deceased) in Massapequa, New York. He died on May 3, 2021, in Lauderdale Lakes, Florida, surrounded by his family. David was 60 years old.

David graduated from Smithtown High School West in 1978, on Long Island, New York. Shortly there after he set out on a new venture, settling in Houston, Texas. He met and eventually married his soul mate Heidi May Schlesinger (deceased), and started their new family.

David was an award-winning produce manager at Randalls. He took great pride in his work, and he was acknowledged for his stunning displays. He eventually relocated with his young family to south Florida, to be close to his loving parents, and continued to work in retail.

In his personal time, he was an avid fisherman, a family heritage that he shared with his father, siblings and sons; and was passionate about music and playing the drums, photography and cooking. He enjoyed his pet reptiles especially the iguanas and loved his dogs, Binky and Buddy. He maintained life-long friendships across the miles. David had a great sense of humor.

David was a loyal son; beloved husband to Heidi and loving father to his sons William and Daniel Schlesinger (both deceased), and to his step son Johnathon. He had a close and loving relationship with his brother Barry. He is survived by his step son Johnathon Hamilton, of Lauderhill, Florida, his grandchild Sophie, and his brother Barry C. Schlesinger and wife Virginia of Lake Grove, New York.

David will always be remembered as a courageous man who suffered many losses and a man with a gentle spirit whose time on this Earth was all too short.

A memorial service will take place at a future date to be announced.

To order memorial trees or send flowers to the family in memory of David Charles Schlesinger, please visit our flower store.