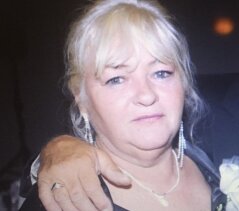 It is with deep regret that I deliver this horrible news. Debbie Siegel passed away in Coral Springs, Florida on Tuesday Morning, September 21, 2021, due to heart failure. Debbie had just celebrated her 68th birthday, two weeks prior to passing.

Debbie was born Mildred Debra Singleton on September 6th, 1953 in West Orange New Jersey. She was the daughter of Dolores “Jean” and Robert Singleton. Debbie was a graduate of Brick Township High School and Wilfred’s Beauty Academy. Her career as a beautician, brought her great joy as she not only enjoyed being a hairdresser, she also loved socializing and meeting new people. On September 30th, 1972, she was married to Kenneth Milton Siegel. Kenneth had attended Ocean County College where he majored in Civil Engineering. He spent most of his career applying that knowledge to his work in the field of underground construction. Following marriage, the newlyweds settled down in Brick, New Jersey. Two years after becoming Mrs. Siegel, Debbie became a mother in the Fall of 1974 with her first son, Jason. She gave birth to her second son, Barrett in the winter of 1976. In 1984, the family moved to Coral Springs, Florida. In late 1987, She finally gave birth to the daughter she had always wanted. Her name was Tabatha. Debbie became a grandmother for the first time in the summer of 2010 when her son Barrett and his wife Juliana welcomed their first child, Jacob. A second grandson came the following year when the couple had their second son, Joshua in December of 2011.

Both sons, Jason and Barrett eventually began careers in the United States Postal Service. Jason is currently the Acting Manager of Maintenance Support for the South Florida District. Barrett is a City Letter Carrier in Raleigh, North Carolina. Tabatha currently works as a saleswoman for a floral wholesale company, while freelancing in computer web design. No longer being able to stand for long periods due to leg pain caused by poor circulation and nerve issues, Debbie retired from hairdressing in 2016. In her retirement she enjoyed spending time with family and friends whenever possible.

Debbie is survived by her husband of 49 years, Kenny, son Jason and his wife Lynn, son Barrett and his wife Juliana, daughter Tabatha, grandsons Jacob and Joshua, sisters Barbara, Tammy, Tracy, and brother Jerry, along with many nieces, nephews, and friends.

To order memorial trees or send flowers to the family in memory of Debbie Siegel, please visit our flower store.