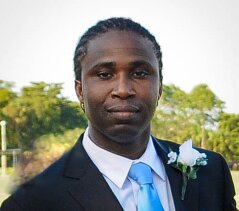 Dieudonne Joseph Jean, 40, passed away unexpectedly on the morning of December 30th, 2019 at his home in Pompano Beach, Florida. Dieudonne (aka Joe) was born March 21, 1979 in Miami, Florida at Jackson Memorial Hospital. He was the son of Charitable “Man Frè” Dorvilas and St. Germain Jean.

Joe was a long-time resident of Pompano Beach and worked as a handyman and auto mechanic. He was known to give a helping hand to others and often used his skills to help friends, family and the elderly. Moreover, he volunteered with Habitat for Humanity, building homes for those less fortunate. Joe was also known for his positive attitude and was always smiling and making everyone laugh. He was a dedicated Miami Dolphins/Hurricanes fan and lover of heavy metal music. Joe’s biggest achievements are his four children of whom he spoke proudly and lovingly: LaQuisha, Brian, Malik, and Joseph, Jr (aka Joey). He will be deeply missed by his spouse Kim Yerton, children, family, friends and all who knew him.

To order memorial trees or send flowers to the family in memory of Dieudonne Jean, please visit our flower store.