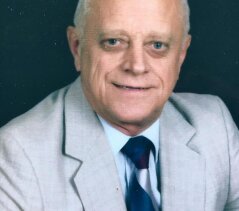 Gerald was born in 1940 in Lowville, New York, son of Harry and Kathryn Hurd, former owners of Hurd's Photography Studio.

He graduated from Lowville Academy in 1956 and joined the U.S. Navy, for two years, stationed in Newfoundland, receiving an honorable discharged. He moved to Michigan where he pioneered, owned and operated Hurd Products: a home improvement store bringing do it yourself home materials to homeowners and contractors before the home improvement big box stores were established. He married and had two daughters and later moved to Florida and became a Master Craftsman.

Gerald is predeceased by his parents and his brother, Dr. Douglas Hurd. Survived by his wife, Elsa, his daughters from a prior marriage, Mindi and her husband, Jamison, and Marci, his two grandsons, Cameron and Logan, and his sister, Barbara.

Gerald loved music and was an avid trumpet player. He enjoyed the outdoors; swimming, cycling, camping in the Adirondacks in New York State and gardening in his retirement years in Sebring, Florida.

In lieu of flowers a donation may be made to the Navy-Marine Relief Society in Gerald Hurd's memory.

https://www.nmcrs.org
To order memorial trees or send flowers to the family in memory of Gerald Hurd, please visit our flower store.

Please note: Due to attendance size restrictions imposed on us by the State of Florida due to this pandemic, we encourage you to contact the family or the funeral home for more information.

Please line up behind lane #3