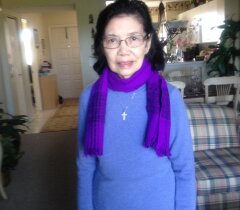 Heidi Tuvilla Sonalan, 84, peacefully passed away on the morning of January 26, 2020 at the home of her son in Davie, Florida. Heidi (also known to family as ‘Baby’) was born September 25, 1935 in Negros Occidental, Philippines. She is preceded in death by her biological parents Amparo Lacson and Istanislaw Sobrejuanite and her adopted parents Visitacion and Tomas Tuvilla.

Heidi graduated from St Paul University in Iloilo, Philippines and became the Dean of Nursing at St Paul’s Manila prior to immigrating to United States in May 1988. Thereafter she worked as a registered nurse for the Bronx VA Hospital and an adjunct professor at Hostos Community College and Helene Fuld College of Nursing in Bronx, NY. Heidi is an avid NY Yankees fan who can tell you the stats of each player, loves crossword puzzles especially The NY Times crossword that none of her children can finish and she can beat anyone in her favorite game of scrabble. Heidi is known to family as someone who has generously helped numerous family members receive an education in the Philippines. Heidi is a quiet and determined fighter who loved her family passionately and is a devout catholic.

Heidi is preceded in death by her older brothers Orlando and Rene Sobrejuanite.

To order memorial trees or send flowers to the family in memory of Heidi Sonalan, please visit our flower store.