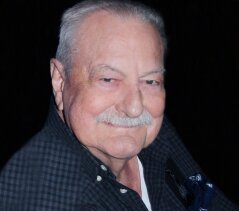 Herb was born July 2, 1931 to Jesse French and Agatha Halstead James in Robson, West Virginia. He had two sisters Edith and Doris and often spoke of his childhood and family with great love, and a tear in his eye. He left West Virginia for Indiana as a young adult, and finally in the 1980’s settled here in Florida.

He leaves four children, numerous grandchildren and great-grandchildren a great-great-grandson, and many nieces and nephews. The family is spread out all over the country and even into Europe. Herb’s family was very important to him. He spent much time over the years researching the history of the James family tree and all its branches. He collected many, many documents related to family members and events including marriage and death certificates, copies of will and other legal papers, photographs, and newspaper articles and announcements. It was not unusual to find an article or a photo of a family member from the turn of the century. He created a book for family members.

Herb worked many years as a civilian computer programmer for the Department of the Army before retiring many years ago. As a retiree he was able to spend more time pursuing his greatest passion – woodworking. He was great DIYer an accomplished carpenter, creating many projects from building kitchen cabinets to tables to bookcases to laying tile. He built a pulpit and communion table for the chapel of his beloved church, UCC Fort Lauderdale, and the chapel bears the name the James Chapel in honor of his work.

Although too ill to attend church for several years, he never lost his love for his church and remained a member. His faith in God kept him strong and hopeful throughout his illness and failing health. He truly believed that his bounty came from the Lord and never wavered in that belief.

To order memorial trees or send flowers to the family in memory of Herbert James, please visit our flower store.