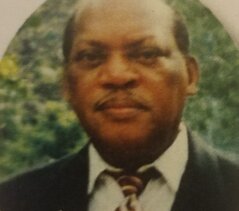 Maître Hermann Florent was born in Thomonde, Haiti on May 20th, 1932. He was the son of Florial Florent and Clairmélie Denizard. He grew up in the city of Thomonde where he attended primary school at St. Joseph until middle school. He continued his education at the parochial school in the city of Hinche where he completed his primary school studies.

After his graduation from primary school, Maître Florent was sent by his parents to Port-au-Prince where he attended High School at the Lycée Toussaint Louverture to complete his secondary school studies. At the University level, Prof. Hermann Florent obtained a degree at the Ecole Normale, where he acquired a diploma in languages (licence en lettres) – Greek, Latin, French literature, and philosophy. He then attended the Faculty of Ethnology where, four years later, he presented his memoire and earned a higher degree in Anthropology and Sociology. Following further studies at the same Faculty of Ethnology, he obtained a master in Developmental Sciences. He then attended the Faculty of Law and Economical Sciences where he obtained a law degree and became an attorney. Maître Florent was also accepted as a member of the Haitian Bar. He practiced as a lawyer while teaching as a professor in several private and state schools in Port-au-Prince. Finally, he attended the Faculty of Applied Linguistics where he graduated with a specialty in linguistics.

Maître Florent also had a fruitful family life. Hermann married Mrs. Ghislaine Mondestin Florent (teacher and administrator) in July 1963. Together, they directed the College Frère Adrien du Sacré Coeur (CFASC), a private school from elementary to high school, owned and founded by Maître Hermann Florent in 1961. CFASC has been in operation since that time and has greatly contributed to the education of several generations of professionals from 1961 until today. CFASC has an excellent reputation with academics and was a leader in inter-school soccer, as well as having a renowned marching band. Maître Florent continued to teach for more than 40 years at the High School and University levels until his retirement, a few months after the earthquake in 2010. Although retired, Maître Florent continued to be the Director and manager of his own private institution.
Maître Florent has also written several books. He has received numerous awards, including being honored by alumni from Les Frères du Sacré-Coeur, his alumni from the College Frère Adrien du Sacré Coeur who have honored him in multiple occasions, from New York, to Boston, to Fort Lauderdale, to Port-au-Prince. He was honored by the organization Korektho of Thomonde and has also received an ambassador award from the International Health Initiatives (IHI).

Maître Florent has led an outstanding life of service as a humanitarian, teacher, lawyer, linguist, writer, and ethnologist. He was an amazing and devoted father, grandfather, husband, brother, uncle, friend, colleague. He dedicated his life and career to his students whom he loved as his own children. His generosity had no boundaries and reached and touched all who knew him. His faith in God was exemplary and he had a special devotion to the Sacred Heart of Jesus. Maître Hermann Florent left us to be with the Lord on March 14th, 2021. May he rest in peace. “Pax Suae Animae”, paix a son ame.
Maître Florent is survived by his children, Dr. Emmanuel Florent and daughter-in-law Dr. Francoise Florent, Dr. Marie Florent-Carre and son-in-law Mr. Philyppe Carre, Mr. Osmann Florent and family; his grandchildren Lisa, Sarah, Emma, Imani, Shalomi; all his nephews, nieces and cousins whom he loved very much; family Florent, family Mondestin, family Denizard, family Bosquet, family Olman, family Jeaniton, family Georges, family Janvier, family Athias, family Laverne, family Debose, family Salter, family Mardy, family Bernadeau, family Sanchez, family Carre, family Pélissier, family Vernet, family Rene, family Pierre, family Charlot and all the families and friends, students, teachers and staff who had a close relationship with Maître Hermann Florent who are affected by his loss.
.

To order memorial trees or send flowers to the family in memory of Hermann Florent, please visit our flower store.

Our Covid protocols require that Masks (covering nose and mouth) be worn at all times when inside the building. The amount of attendees allowed during the services is limited to half capacity. Attendees will be greeted at the door to ensure that al