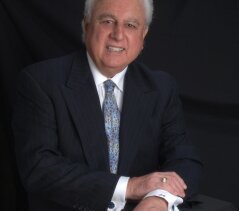 DIPIETRO, Emidio Armando, aka Jay DiPietro, JD, Mr. D, Dad, and his most loving aka Papa Jay entered eternal life on Sunday, March 6, 2022, in the loving comfort of his home.

Growing up in Boston as the oldest of seven first-generation Americans, Jay learned responsibility at the tender age of 11 years, earning his first wages at the Hampshire House. As a young man, he proudly served his country in the Korean War. After seeing the Army’s Mess Hall, he jokingly said that he now understands why it’s called the Mess Hall. He requested that assignment and with his creativity and ingenuity, it became the Grand Mess Hall of choice. Thus, paving the way into the hospitality industry. His career started as a manager trainee and later as a manager with the Playboy organization, followed by Holiday Inn Hotels, Restaurant Associates New York and Boston, and Longchamps of Florida. He managed and operated five high-end restaurants in Miami/Dade County before becoming the general manager at the Bal Harbour Yacht & Beach Club, being his entry into the private club industry. Jay dedicated 32 years as the President, COO, General Manager of Boca West Country Club, Boca Raton, FL. He transformed it into a leader in the Club industry. Under his leadership, Boca West Country Club became the recipient of the coveted awards for Distinguished Clubs and Platinum rankings as number one in the country for private residential country clubs; It became the number one in the State of Florida for all types of clubs, and fifth in the world. His love affair for Boca West Country Club is where his true legacy began. BWCC proudly promotes his legacy with the incredible namesake, Mr. D’s restaurant. This is also where his legendary charitable life in “giving back” became his mission. As a result, thousands upon thousands of special needs and underprivileged children became beneficiaries of his loving and caring nature. He founded and Chaired the Club Managers of America Seminole Region Chapter Charity Golf Tournament and Gala for the benefit of underprivileged children. Under his leadership raised over $6.7 million for Special Olympics Palm Beach County, SOS Children’s Village Florida, Place of Hope, Florence Fuller Child Development Center, 4Kids, Unicorn Children’s Foundation, the George Snow Foundation, First Tee of Palm Beach Gardens, Achievement Centers for Children in Delray Beach to name a few.

Jay’s charitable reach didn’t stop with children… he had an immense passion for animals in need and supported his wife wholeheartedly in her endeavors as the Chairwoman of Tri-County Animal Rescue. He beamed with pride when he boasted about all that she was accomplishing for so many neglected and abused animals.
He was an industry leader, iconic, and revered. He has been the proud recipient of honors too long to detail all, but a few are Excellence in Club Management “Top Gun”,” Most Valuable Member of the Florida Chapter for which is now named the “Jay DiPietro MVM of the FLCMAA, the BoardRoom Magazine’s Lifetime Achievement Award, past honoree of the Jewish Federation of South Palm Beach County, National Jewish Humanitarian Award, He was often the guest speaker at the Harvard University School of Business; past director, Educational Institute of the Michigan State University, past guest instructor for the School of Hospitality Management at Florida International University, and member of the Club Managers Association of America Honor Society.
He was a pillar of the community, serving on numerous charity boards and receiving distinguished community honors – recipient of the Rotary Club Opal Award, Florence Fuller Man with a Caring Heart Award as well as the Man with the Biggest Heart and Lifetime Achievement Award, and SOS Children’s Villages as Florida’s Outstanding Individual of the Year, Special Olympics Hall of Fame, Ambassador of the Poor as honored by Food for the Poor, and the Place of Hope’s Inaugural Jay DiPietro Hero of Hope award, which a recipient will be named for many years to come.

The loss of Jay will be felt across the world but truly felt by those in South Florida where he was considered by many as a local legend. The adage, “Gone but not forgotten” is apropos because once you encountered his bigger-than-life personality you certainly never forgot Jay.