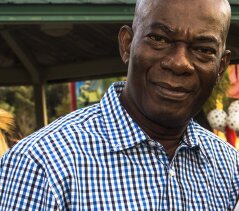 Jean Bart Theork was born in Port de Paix, Haiti on December 25, 1954. He is the fifth child of Suzanne Similien and Murat Theork’s six children. He is survived by his sister and brother, Sabinette Claudia Theork and Sylvestre Theork. Upon arriving in the United States in 1974, he worked as a chef at the Rustic Inn for five years. He also worked at Walmart for over ten years where he retired as a merchandise stock associate. In his spare time, he loved spending time with his family, going to church, watching the dolphins and heat play, and playing dominoes with his friends.

Jean was beloved by all ten children and thirteen grandchildren. He was very family oriented. In his eyes, his family was everything, and what mattered the most was his family staying together. He would always sit his children down to preach to us that education was extremely important and to make sure we lived a meaningful and successful life. He always had a positive attitude and would give you the shirt off his back if you needed it. Although it deeply hurts that you are no longer here, we find peace that you are in God’s presence, and you no longer feel pain. We will always remember the last words you told us, and the lessons you taught us directly and indirectly. His strong faith in God helped in fighting the battles with his health all the way through. He never wanted anyone to worry so whenever someone asked how he was feeling he would say “not too good, not too bad” and that he was “leaving everything up to God.” He was so kindhearted and grateful for the smallest things. He would say thank you over and over for a simple gesture like cooking him a meal. Everyone knows his daughter as Nica, but to him, she will always be his “Na-Na”.

To our loving father, you were immensely loved, and you will deeply be missed. Although it is hard to accept that you are gone deep inside our hearts you will live on forever. You have always taught us to dream big and motivated us to achieve our dreams. Your positivity and high spirit have been constantly infused within us. We thank you for your patience with us, you have always believed in us through the good and bad times. Your support has brought us through the toughest of times. We always knew we could count on you when things just didn’t seem right. To say we are blessed to have you as a father would be an understatement. You have been our courage, role model, and teacher. Throughout the years you have never shown one sign of weakness, you stayed strong and worked very hard to provide for us. You always told us “Be yourself, don’t follow the crowd”. All we have now are your memories and your pictures. Now that our heavenly father has taken you in his arms, the love you had for us will live on in our hearts.

A prayer from his son Ernso “Oh God, forgive my father for the sins that he committed knowingly and unknowingly while he was alive. Purify his mind, body, and spirit with hail, snow, and ice until it is clear as glass. Then allow him access into paradise with your mercy, for you are all-merciful and forgiving. He was a selfless, dedicated man that loved and sacrificed for his family. May his good outweigh the bad and may he find peace and salvation with you, his creator, almighty God.”

To order memorial trees or send flowers to the family in memory of Jean Theork, please visit our flower store.