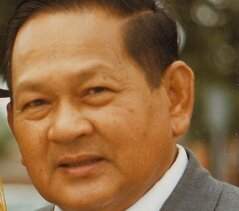 Jose (Joe) Vergara Barcelona, Jr. passed away after a short illness on January 29, 2021. He was 83 years old. He is survived by his children, Vanessa (John), Mylene, Stephanie (George), and Jose, III (Melinda); his grandchildren: Jack, Luke, Wolfgang, Alessandra, and Charlotte; and his sisters: Athena, Eden, Perla, and Rowena. He was loved and adored by all of us, his family. He was known to many of his friends as “Joe Bar”, and by all accounts, he was the object of respect and great affection not only by them, but by all who knew him.
He was born on July 28, 1937 in San Esteban, Ilocos Sur, the son of Dr. Jose Barcelona, a dentist; and the former Teresa Vergara, a teacher. From a young age, he strove for excellence in all that he chose to accomplish. He spent countless hours playing the piano and the violin. He graduated valedictorian of his high school class of more than 500 students (Ilocos Sur National High School, class of 1955). He attended the Philippine Military Academy where he qualified as Expert, the highest level of marksmanship, in several testing qualifications. He was also the school’s champion boxer. He earned his Bachelor’s and Law degrees from the University of the Philippines in Manila, where he also served as Lord Chancellor (President) of his fraternity, Alpha Phi Beta. It was at the UP College of Law that he met our mother, the former Marielen Tan Suazo, his wife of almost 52 years. They both attended night school. By day she worked as a congressional intern and he worked as an Analyst for the NICA, the Philippine’s Intelligence Bureau. He soon after worked as Chief of Intelligence at the Philippine Bureau of Customs. After graduating from law school, he served as in-house counsel for Mitsubishi Corporation, and by the time he left that office, he had risen to the position of Deputy Director.
When we came to America as a family, he and our mother had turned their backs on all that was familiar only to face an unknown future in America. But earn they must, not only to stay legally in this country but most importantly (to them), to finance their children’s higher education. Our dad valued education because to him, it was the only thing he could give us that no one could take away. But it was not the only thing. He did not realize that one of the greatest gifts he gave us was actually free: his quiet strength. This important aspect of his character was evident in his humility and steadfastness in the midst of situations that left others in doubt and racked with anxiety. He believed that every experience and every person could teach him something; that everything -- good or bad -- happens for a reason, if only for the lesson to be learned from it as we move on into the future. What a positive way to draw strength even from life’s vicissitudes! And this strength that he displayed meant that he was not swayed by others’ judgments or opinions. He did not answer to them after all. He only had to answer to God. What a testament to his faith and trust in God, this calm acceptance of His Hand in all the challenges and celebrations that marked my father’s ife.
He was a loving dad, never angry when he disciplined us, his children. He demanded excellence in our efforts, always pushing us to do our best and always making clear that we had his support and guidance anytime we needed him. He always told us to say our prayers, to keep God in our lives at all times. But while he loved us all, our dad loved and cherished our mother most of all. He was devoted to her. He took care of her the best he could -- when she let him – and as independent as she was, she did not always let him. But as the years wore on and we left their home and they only had each other to turn to from day to day, it was heartening for all of us to see just how much they derived strength and comfort from the other.
Our father’s journey in life ended not too long after our mother succumbed to the ravages of pancreatic cancer on November 22, 2020. He lived a long life that was full of love and devotion to his family. But God’s Good and Faithful Servant had completed his biggest and last mission on this Earth when he took care of our mother so lovingly and so devotedly until her death. And so now we, his children, will derive comfort and peace in accepting God’s Plan to take our father so soon after He welcomed our mother into Heaven, so that they could both start living their eternal lives together in the comfort of Jesus’ loving arms.

To order memorial trees or send flowers to the family in memory of Jose V. Barcelona, please visit our flower store.