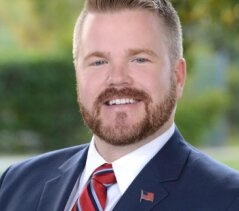 Justin Stuart Flippen was born in Hollywood, Florida. After graduating from Coconut Creek High School as valedictorian, Justin attended Broward College earning his associate degree in political science. Thereafter, he attended Florida Atlantic University obtaining his bachelor’s degree in sociology with a minor in Latin American studies. During his time at FAU, Justin was immensely involved in school politics, winning his classmates vote and being elected student body president. Following FAU, Justin earned a law degree from the University of Florida Law Program (Class of 2004).

Justin Flippen was full of life, love, and ambition - earning multiple degrees, building a successful career in public service, and working full time for Greater Fort Lauderdale Convention and Visitors Bureau all while finding time to do what he loved most - travel. Justin accomplished visiting all 50 states and over 500 U.S. national parks by the age of 40.

He was a strong leader for the LGBT+ community, fighting for equal rights of all people. He has a long record of an unequivocal position on equality including supporting marriage equality and leading Wilton Manors to become the first Florida city to formally support the repeal of Don't Ask Don't Tell and call for the end of the discriminatory ban on gay men donating blood.

Justin was a beloved and cherished member of the City of Wilton Manors where he served as Commissioner for 10 years before being elected Mayor in November of 2018. The people elected Justin by one of the largest margins in the city’s history. Because of his grassroots approach to public service, populace appeal, and longstanding history and connection to Wilton Manors, Justin was known as “The People’s Mayor.” Justin was a man of and for the people. He worked tirelessly to bring positive change to Wilton Manors, earning a spot in the hearts of everyone who knew him. Some of Justin’s most cherished and notable moments were during his support of the children of Wilton Manors. He believed in investing in future generations and cared deeply for the citizens of his city.

Justin was a man of family, remaining close to his father and mother throughout his life. He was the oldest of five with four younger brothers for whom he cared deeply. Justin is survived by his father, James Flippen (wife Karen); mother, Stephanie Flippen-Chandler (husband Mark); brothers, Gregory Flippen, Jeffrey Flippen, and Timothy Flippen; grandmother, Judy Stickovich; and uncles, aunts, and cousins. Justin is preceded by his brother Nicholas.

Justin Stuart Flippen was a devout Christian. His relationship with God shined through in everything he did. He strived to be the most honest, just, and hard-working man he could be. Loved by many, Justin was also known to have a light-heart. Finding humor in everything he did, he filled the room with laughter and optimism. His passing was an unexpected tragedy. He will be forever and deeply missed by all who knew him.

In lieu of sending flowers or gifts, Mayor Justin Flippen’s family respectfully asks for donations to be made to the Justin Flippen Memorial Fund at Our Fund or United Church of Christ Fort Lauderdale.

The Justin Flippen Memorial Fund has been established through Our Fund to provide support for Florida LGBT+ students aspiring to enter public service and pursuing a degree in political science or a related field.

Credit card donations can be made at https://www.our-fund.org/justin_memorial/ (OR) checks may be mailed to:

To donate to United Church of Christ Fort Lauderdale, checks may be mailed to:

To order memorial trees or send flowers to the family in memory of Justin Stuart Flippen, please visit our flower store.