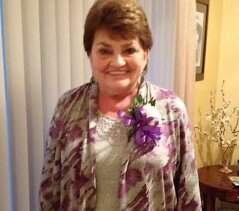 On Tuesday, April 30, we said goodbye to our mother, Kathaleen. She passed away after a long illness of COPD. She is now resting comfortably. Kathy was born in Worcester, Mass. and graduated from St. Peter's High School. She worked her first job at Sears and Roebuck in Downtown, Worcester. Kathy was so proud of her days growing up in the Worcester area.

Kathy is predeceased by her mother Grace "Gay" Gilmore and her father, Edward "Pat" Fallon, both of Worcester, MA.

Kathy worked as a GM at Winn Dixie Supermarkets until she became too ill, but however, always remained active at home.

She loved decorating, baking and cooking especially when the girls came around. She spent her free time playing Bingo, her "favorite" pastime.

Kathy was a great mother, sister, daughter and most of all friend. She would do anything for anyone. Her heart was amazing. We will miss you forever. Love you.
To order memorial trees or send flowers to the family in memory of Kathaleen A. Hey, please visit our flower store.