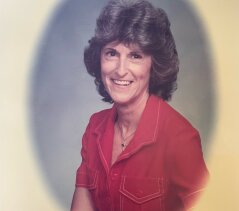 Kathleen May (Hurren) Godin passed away March 22, 2022, after a long illness.

Kathie was born on January 21, 1942, in Pulham St Mary, Norwich, England to Albert John Hurren and Marie Pechy (Arnold) Hurren. Kathie emigrated to the United States in 1982. Six days after landing in Sarasota, Florida, she met the love of her life, Bob, on June 6. They were married on November 20, 1982.

Kathie and Bob moved to Ft. Lauderdale in 1983. She worked as a seamstress for Zola Keller for more than 30 years until she retired in 2015. She kept up her love of sewing and knitting by making and altering clothing for family and friends and by knitting caps and booties for newborns for the Respect Life Ministry of the Archdiocese of Miami.

Along with her beloved husband, Bob, Kathie was a member of St David Catholic Church in Davie, Florida, the Florida Mopar Connection Car Club and the Gold Coast British Sports Car Club.

In lieu of flowers, Kathie’s family would appreciate donations in her name to one or more of the following charities: American Cancer Society, Respect Life Ministry of the Archdiocese of Miami and St. Jude Children's Research Hospital.

A memorial Mass will be celebrated Friday, April 8th. 10:00 am at St. David catholic Church 3900 S University Drive, Davie, Fl. 33328
To order memorial trees or send flowers to the family in memory of Kathleen Godin, please visit our flower store.