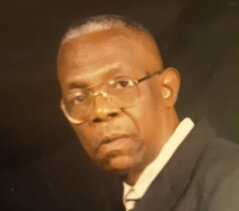 Luc Jean-Francois was born in Cap-Haitien, Haiti September 7, 1941. He is the ninth child of Anne Jean-
Jacques and Laërte Jean-Francois’ ten children. Luc attended all of his schooling in Cap Haitian. He
attended primary grades in Catholic school Frere de Instruction Chrétienne. For his secondary school he
attended “College du Notre Dame Secours.” He finished his training at the “Université d’Etat D’Haiti”
where he received professional training in analyzing and interpreting a variety of laboratory specimens.
Upon his graduation he was one of the laboratory technicians who helped to pioneer the establishment
of the first modern day laboratory that was set up in L’hôpital Justinien in Cap Haitien. He worked in his
post as a laboratory technician for more than 30 years. He also worked for more than 40 years in
“Bureau du Commerce in Cap Haitien.

It was at the Bureau du Commerce au Cap Haitien that he met his wife Marie Aurella Colas. Together Luc
and Marie (nicknamed Ti Botte) formed a blended family that consisted of 2 of his own biological
children he had with Ti Botte and another five children that Ti Botte had prior to meeting Luc. Like all
human beings, Luc had his flaws but I will rather focus on the part of his character that made him
beloved by all of his seven children. To his children he was our beloved “Pa Luc”. Considering the
mindset of the generation in which he was brought up Pa Luc was a liberal minded man. To that end he
had no qualms in engaging in domestic work when it came in the care of his children. For instance on
Fridays he would send the servants home early and he would enjoy cooking a big pot of bouillon for all 7
of his children. He would let the children taste the bouillon while it was still cooking in the pot even
when his wife would plead with him not to do that because this would end up making the children pick
up bad table manners. Also to the chagrin of his daughters when Ti Botte or the servants were not
available to comb their hair, Luc would not hesitate in giving his daughters some interesting hairstyles.
These hairstyles went down in the history of our primary grades years as the source of unrelenting jokes
from our old school mates that still till this day could make them break into roaring laughter.
Luc was also a sentimental man who loved reading good stories, listening to music especially his favorite
band Septentrional. He was an excellent dancer and he made sure all of his children learned how to
dance compas. He would put them on his feet and he would twirl them around while listening to his
favorite Compas. He loved a good joke and he loved to regale his friends with stories to make them
laugh.

When it came to the disciplining of his children, he was at times our Great Emancipator from Ti Botte.
You see Ti Botte firmly believed in the bible teaching “Spare the rod spoil the child.” To that end when
my mother would tell us to kneel as we anxiously waited for the spanking we were going to get, the
“Great Emancipator” would come to our rescue. He would say “Get up from this kneeling. Children
should not be spanked. You should talk to children” His children loved him for that! His children hated
to disappoint him, but when they made mistakes he gave them the opportunity to correct what they did
that was wrong and to do better.

To order memorial trees or send flowers to the family in memory of Marc Luc Jean Francois, please visit our flower store.