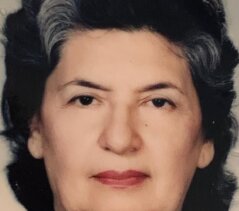 Maria Libia Silva was a beloved daughter, sister, wife, aunt, mother, mother-in-law, grandmother, and great grandmother during her incredible 92 years of life. She passed away on Wednesday, January 19, 2022.

Libia was born on October 21, 1929, to loving parents, Jesus Maria Silva and Isaura Tejada in Bugalagrande, Colombia. In their beautiful and large family, she was the second of 14 children where she was the big sister and role model to many of her younger siblings with beautiful memories of growing together in their childhood home. She attended a Catholic school where she studied French and Latin.

On December 29, 1955, Libia married the love of her life, Luis Eduardo Angel, and they had 3 children, Luz Elena, Maria Isabel Cristina, and Santiago Eduardo. They loved to go on trips and to explore the outdoors. She always spoke fondly of their time together and her eyes sparkled whenever she would talk about her days with her husband in Calima, Colombia.

After becoming a widow on February 25, 1963, Libia worked hard to provide for her family and give them the strength to overcome their loss. She worked at the Courthouse in Buga, Colombia, the Club de Yano in Cali, Colombia, and Deportes Olimpico in Cali, Colombia, where she saved enough money to open her own bakery and provide a better life for her children.

Throughout her life, she helped to maintain orderly households and to raise many of the children in her family with an abundance of love and devotion. In 1987, she moved to the United States and lived in Plantation, Florida, where she helped to raise her grandchildren, Luz Alexandra Wehmeyer (Contreras), Santiago Alberto Contreras, and Luis Edwardo Sanchez. She then moved to Pembroke Pines, Florida where she helped to raise her nephew and niece, David and Nicole Friedman. She then purchased a house in Pembroke Pines, Florida, where she lived with her son, Santiago Angel and his family, helping to raise her two granddaughters, Vanessa and Diana Angel. After retiring, she enjoyed knitting scarfs, sweaters, hats, and blankets for her loved ones. Every time she gave you one of her knittings, you knew that she spent months thinking of you and sending you love as she made it, and it filled you with a deep sense of happiness and love.

Libia lived a life of humility where she dedicated her life to her family, always giving everything she had to make the rest of her family happy and successful. She sacrificed a world of possessions for a world of generosity. She never missed a birthday or spent a moment without reminding her family how much she loved them. She gave the world infinite love and could cheer anyone up by just her sweet ways of saying hi, “corazón de melón, mi vida, papito lindo, mi niña bella…” Our family was truly blessed to have had her in our lives.

A gathering of family and friends in memory of Maria will be held on Saturday, January 29, 2022, at Serenity Funeral Home & Cremation, 1450 S State Road 7, North Lauderdale, FL 33068.
To order memorial trees or send flowers to the family in memory of Maria Libia Silva, please visit our flower store.