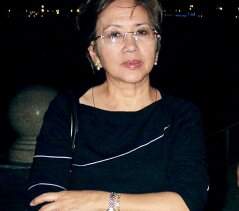 Marielen Suazo Barcelona passed away on November 22, 2020 after a valiant 18-month battle with pancreatic cancer. She was 75. She is survived by Joe, her husband of almost 52 years; her daughters Vanessa Pilarski (John), Mylene Barcelona, Stephanie Barcelona (George); her only son Jose “JB” (Melinda); and her 5 grandchildren: Jack, Luke, Wolfgang, Alessandra, and Charlotte. She is also survived by all 6 of her siblings, their spouses, children and grandchildren. And she was much loved by all of us.

Marielen was born on December 7, 1944 in Ormoc City, Leyte. She was the daughter of Maj. Vicente Suazo, a career officer in the Philippine military who fought alongside American forces during WW2; and Rosario Tan Suazo, a college profesora of Spanish.

It was in law school that she met our father. He had noticed her for some time, and finally walked up to her while she stood in front of the school with a friend while waiting for her ride. He introduced himself to her with these memorable and thankfully prophetic words: “Hi, my name is Joe. Someday you will be the mother of ALL my children.” She didn’t pay him any mind then (he was popular with the girls), but couldn’t help but notice him when, at a social event held at the home of their law school dean, he walked up to a nearby piano and started playing. The piece that charmed her? Warsaw Concerto. This happened in 1966. Following their graduation, they married on December 7, 1968, the same day she turned 24.

Theirs was a marriage that spanned more than 51 years and 2 continents. It was a marriage that survived many challenges largely caused by the move from one country where they were both living very comfortably, to a country half a world away where they had to start over. But with resilience, the commitment to see things through, hard work, their ever-abiding devotion to family and each other and their deep faith in God, they moved forward, always forward and always together.

She lived a full life. She traveled all over the world. She wore many hats during her 75 years on this Earth and she wore them all with dignity and grace. She had many friends who loved her and were devoted to her even though she herself admitted many times that she wasn’t too good about keeping in touch. But for her children, she did everything. Nothing was too small. Nothing was too big. If it was for our benefit, she got it done. To put family first is a lesson we all learned well because she taught it well.

By all accounts, she lived an excellent life. She made wise and courageous decisions and we, her surviving family, are the beneficiaries of the good choices she made with our dad by her side. We are grieving her loss and we will grieve her loss all the days of our lives. But we are not lost without her. She made sure of that. Her legacy and her memory are in good hands.

To order memorial trees or send flowers to the family in memory of Marielen Barcelona, please visit our flower store.