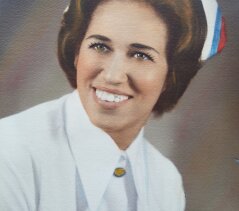 She attended Kingston Technical College. She married Kenneth George Reid in August 1959 migrated to New York in November 1959. Gave birth to three children Delroy and the twins Michael and Michelle.

She studied nursing and started as a LPN at Queens General Hospital in 1971. In January 1974 she lost her husband Kenneth and returned to school and obtained her RN license in 1977.

She relocated to Miami Florida in 1979 where she worked at South Miami Hospital till her retirement in 2005 for a total of 27 years in nursing.

She is survived by her three children, step children Kenneth and Icilda, son in law Christian and siblings Syliva, Anthony, Patsy, and Maureen as well as numerous nieces and nephews.
To order memorial trees or send flowers to the family in memory of Marjorie Reid, please visit our flower store.

If placing a flower order, please click edit and select funeral home as place of delivery.