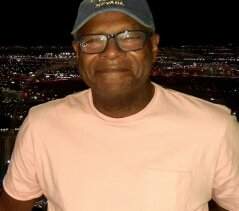 Born on June 6, 1956 in Sandusky, OH to loving parents Druscilla Brown Hearn and Leroy Hearn Jr., Mark Lynn Hearn immediately filled the lives of those around him with joy. Mark’s family relocated to Cleveland, OH when Mark was around 5 years old. Mark graduated from East Tech High School in Cleveland, OH in 1973 and briefly attended college at Cleveland State University to study graphics design and commercial art. After leaving college, Mark was first employed by Stout Brothers Co., Inc. Wholesale Fabrics in Cleveland, OH in the shipping department. Stout Brothers later moved their offices and warehouse facility to Colmar, PA and Mark relocated to the Philadelphia area so that he could continue working for them.

Mark met his life partner David Leach in Philadelphia, PA in May, 1992 and they remained together and committed to each other until his death. After leaving Stout Brothers Co., Inc. Mark relocated to Indiana and worked at Park Square Manor Assisted Living facility in Avon, IN as the resident night shift attendant. Mark then moved to Plainfield, IN and worked as a warehouse technician at the Becton, Dickinson and Company medical products warehouse. Mark then briefly returned to Cleveland, OH and worked as a materials delivery technician at Cleveland Clinic. Mark eventually relocated to Jacksonville, FL and worked in the Fanatics sports apparel warehouse. He last worked part-time as a floor technician at Heartland Health Care in Jacksonville, FL. He fully retired in 2021 and moved to South Florida with his life partner.

Mark was a loving uncle to his nephews and nieces, and he also developed close bonds with his cousins and other family members. He came from a large family that geographically spanned the U. S. He made many dear friends and regularly connected with his friends and family members using social media. Mark was passionate about cooking (he was an accomplished chef and delighted his friends with gourmet meals), travelling, hiking and exploring the great outdoors, growing bonsai and cacti (he created and gave away many beautiful miniature gardens), classical and jazz music, and art of all kinds. He was a firm believer in a higher power and accepted Christ at an early age. He last attended church at Christ Church of Peace in Jacksonville, FL.

Mark was fortunate to have travelled on vacation to Puerto Vallarta, MX; Guanacaste, Costa Rica; New York City, NY; Chicago, IL; Paris, France; Montreal, Toronto, and Vancouver, Canada; Miami and Key West, FL; and Las Vegas, NV (his last vacation trip). He organized and hosted a large and very successful family reunion in Tulsa, OK in Oct. 2018. During the last months of his life he once again started oil painting, he was talented and he created some beautiful abstract paintings. His presence is sorely missed and his loss is deeply felt by all who had the privilege of knowing him. He was a kind, deeply caring, and gentle soul who filled the lives of his friends and family members with joy. Those happy memories of spending good times together are his legacy to his family members and friends.

Mark is predeceased by his parents Druscilla Brown Hearn and Leroy Hearn Jr., and his brother Wesley Hearn. He is survived by his brothers Christopher Hearn, Larry Hearn, and Orlando Hearn.

Serenity Funeral Home is located next door to Our Lady Queen of Heaven Church and Cemetery.

Chaplain James Sargent of United Church of Christ in Fort Lauderdale, FL will preside at this service.

To order memorial trees or send flowers to the family in memory of Mark Lynn Hearn, please visit our flower store.