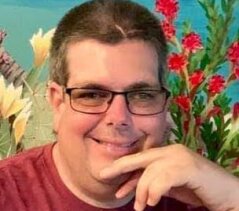 Matthew Sutton stepped into the loving arms of his Heavenly Father, Sunday, November 15 after a year and a half battle with brain cancer. He is the adopted son of Bob and Jan Sutton of Plantation, Florida. Matthew was born in Olathe, Kansas, and lived out his 40 years in the same home in Plantation.

Matthew lived a life of loving service to Jesus and to others. He began his relationship with Jesus at age five and as a young child he was deeply touched by the song, “Make Me a Servant.” As a result he dedicated his life to making others, especially children, happy and bringing joy into their worlds.

Matthew’s life-long battles began at an early age. When he was 18 months old he was diagnosed with a non-malignant but very aggressive brain tumor. Subsequent surgery to partially remove the tumor and subsequent radiation therapy left him blind in one eye and only partial vision in the other. Because of the radiation damage to the brain he also had difficultly processing information, organizing and relating to his peers. When he was a young teen ager, the tumor began to grow again leading to another surgery and a year and a half of chemo therapy. In spite of these difficulties he graduated high school from Westminster Academy and earned a non-teaching degree in elementary education from Florida Atlantic University. He loved music and was part of “Florida Singing Sons” for two years.

For twenty years he volunteered as a teacher’s aide at Castle Hill Elementary School where he was known as “Mr. Matt” to classes of young special needs children. He also regularly visited a nursing home where he brought delight to older people with his puppets, jokes and hand-made gifts.

Matt had a classic sense of humor. Known as the “Punster” he delighted others with his amazing off-the-cuff puns and self-depreciating humor. He found humor in every situation lightening up even the most difficult of times. He told the neuro-surgeon who did his last brain surgery, “Doc, you left me in stiches.”

Most of all, Matthew loved to worship his God. He deeply believed and practiced that the way into the presence of God when in difficult times was first, thanksgiving; and, second praise. During the darkest hours of the last 18 months of his life, even as his mental faculties were waning, he would lift his hands and sing praises, giving thanks for all that God had done for him in his life. One of his favorite sayings was, “God’s got my back.” He was very ready to leave this life and rejoice in the hugs from his, “Daddy, God.” He is now rejoicing, laughing, whole and waiting for those of us who will join him later. Many hearts here are experiencing an emptiness, but heaven is fuller for his presence.

To order memorial trees or send flowers to the family in memory of Matthew Sutton, please visit our flower store.