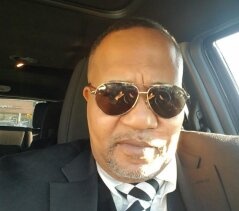 Mr. Mitchell Frantz Thevenin was born in Port-au-Prince, Haiti on August 18, 1966
as the third sibling from Mrs. Jacqueline Thevenin (born Jacqueline Barthelemy)
and Mr. Jean Walter Thevenin. He was the godson of his maternal grandparents
Mr. Victor Barthelemy and Mrs. Francine Barthelemy (born Francine Barthelemy).
Our beloved and departed Mitchell has led an exemplary life of being a pioneer
and entrepreneur from a young teenager even onto his later years. He was the
first to start working for the New York Daily News at the age of thirteen and that
required great commitment and discipline. Years later, while attending college, he
refined his skills of communication and persuasion in order to become a top-
notch advertiser and salesman. Later, Mitchell lived in Haiti in order to connect
with his grandmother and work as an English teacher for an American school. He
also worked briefly for the Haitian Times newspaper.
Back in Miami, he was able to use his knowledge and skills about real estate and
business to acquire and run a large Haitian bakery operation: Saint Marc Bakery.
In that venture, Mitchell’s charisma earned him the popularity and admiration of
so many in the heart of Little Haiti.
In 2007, he returned to Haiti and married Ms. Flore Gacette, his beloved devoted
wife and childhood sweetheart. He once again redefined himself as an
entrepreneur by managing real estate ventures in Haiti. He especially devoted
himself to closely educating and building close ties with his children.
In our hearts, Mitchell has been the one to spur new directions in the family and
defying the odds to succeed: first to start working, first to move and settle to
Miami, first to resettle and reconnect with both assets and family back in Haiti.
As a son, brother, father, uncle, cousin and friend, Mitch was fiercely protective,
loving and passionate about his family. Loyalty, honesty and discipline were non-
negotiables for him, and he held everyone accountable to those standards,
especially his children. Even onto his last days, he always expressed how happy

and proud that he had labored and nurtured a healthy line of connection and
communication with all his children.
Mitchell enjoyed a lifelong partnership and commitment with Dorothy Louis-
Jeune. He is mourned by all who knew him and loved him especially his children,
his siblings, nieces and nephews. His progeny includes Sebastian Thevenin, Keano
Thevenin, Ed McFallen Thevenin, Andrew Thevenin, Michelle Francine Thevenin,
Gabriel Thevenin and Fabrice Thevenin. His siblings include Pierre Lesly Thevenin,
Regine Thevenin, Dr. Rose Thevenin, Nancy Thevenin, Stanley Thevenin, Stella
Thevenin, Jeff Thevenin and wife Edrine Thevenin. His nephews and nieces
include Catherine Thevenin, Victoria Thevenin, Jordan Thevenin and Jacqueline
Thevenin. He is also mourned by Marphyse , Linda Joseph and Adeline Herisse. His
surviving uncles and aunts include Dr. Hercules Barthelemy and wife Mrs. Ermite
Barthelemy, Dr. Douge Barthelemy and wife Mrs. Marie Barthelemy, Mrs Freda
Israel and Mr. Jacques Lacrete who also mourn the passing of their nephew.
We will forever be thankful and grateful to the Almighty for all the time he has
spent with us which was so rich in inspiring examples of bravery, boldness and
dedication.

To order memorial trees or send flowers to the family in memory of Mitchell Thevenin, please visit our flower store.