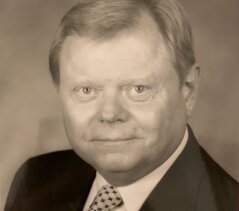 R. Wayne Gibson departed this life for his next great adventure on November 15, 2019.

The soundtrack of his life was full of love, service, generosity, and music.

Wayne’s life began in Atlanta, Georgia on August 2, 1939 and although he spent some time living in upstate New York, and receiving his education in other locations, during his lifetime his roots remained firmly planted in Georgia soil.

His educational background supported his musical talent and his great love of music. He received a Bachelor of Arts degree from Huntingdon College in Montgomery, Alabama and a Master of Music and PhD from Northwestern University in Evanston, Illinois.

Dr. Gibson spent his career years at Kennesaw State University in suburban Atlanta, teaching music and in administration as head of the Music Department and teaching Voice and Music History. Following that, he was Assistant to the President for Arts Affairs until 2000.

Wayne is survived by his husband, Fausto, his sister-in-law, Myrna Gibson and three nieces, Patti, Gigi and Cathleen. His parents and his brother, Howard, and sister, Peggy, preceded Wayne in death.

Wayne departed this life in physical form at home surrounded with love. His light, his great generosity and service—and his music—plays on.

To order memorial trees or send flowers to the family in memory of R. Wayne Gibson, please visit our flower store.