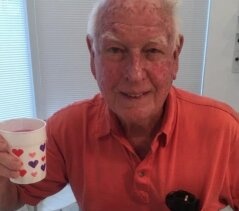 Ray was the youngest son of Fred and Carrie Willams, and was born in Easley, South Carolina on January 8th, 1928. Ray moved to Fort Lauderdale from SC to join a water rescue team in 1954 and became a life guard. It was there at the beach where he met his wife, Carol Williams. The rest is history.

He was predeceased in death by his wife of 62 years, Carol Schmitt Williams and his daughter, Diane Williams.
Ray is survived by his children; MJ Hartnett, Kathleen Willams Thorman (Steve), Judy Williams Kirk (Doug), Peter Williams and Tim Williams. He also has 21 grandchildren and 44 great grandchildren.

Because of Covid restrictions a short memorial service will be held at Queen of Heaven Cemetery on January 22nd at 2:30
To order memorial trees or send flowers to the family in memory of Ray P. Williams, please visit our flower store.