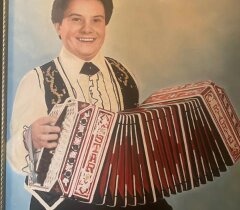 Richard "Jersey Polka Richie" Drongoski, known as Americas concertina king, Jersey Polka Richie has entertained fans everywhere though his love of Polka music and mastery of the concertina. Born Richard Drongoski in Clifton, NJ, his first public performance was at the age of ten with LI'L Wally, Richie collaborated with two of his Idols, Casey Siewierski and Eddie Blazonczyk, Sr. on his first two Recordings. During his Third recording session, LI'L Wally nick named him Jersey Polka Richie. Richie played regularly with Happy Louie and Marion Lush before performing on his own. He has also shared the stage with Bobby VInton, Marie Osmond, and Liberace. Richie had the honor of performing at Liberace's Birthday Party in Las Vegas in 1985. A member of the world Concertina Congress Hall of Fame, Richie spent over 50 years as a Polka performer, promoter, and recording artist. His talent and musical style have left an enduring impression on the Polka industry. For his many accomplishments in the Polka Industry, Richard "Jersey Polka Richie" Drongoski, has been deemed deserving by the electorate of the International Polka Association for induction into Polka music Hall of fame.

Services will be held on Wednesday, June 22 , 11am at Serenity Funeral home, with an entombment to follow at Queen of Heaven Cemetery.

Services will be held on Wednesday, June 22 , 11am at Serenity Funeral home, with an entombment to follow at Queen of Heaven Cemetery.