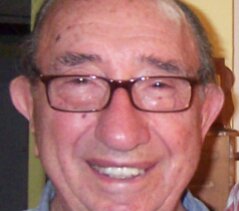 Andrew Robert Danna was born to Giuseppe and Maria Danna (D’Anna) in Rosenhayn, New Jersey. With nine brothers and sisters, there was plenty of help to work the family farm where they lived in Bridgeton NJ.

Later, Robert was a factory worker/machine operator and played guitar and sang for fun at parties and local events.

He enlisted in the US Army Air Force on November 14th 1942 and served with the 647th Bomb Squadron as a Radio/Radar Equipment Specialist in the Air Offensives of Europe, Ardennes, Central Europe, Normandy, Northern France and Rhineland during WWII… returning home after 3 years and 9 days with a rank of Sargent and medals for European African Middle-Eastern Service and Good Conduct.

As a man who loved to dance, he frequented the local dance halls where he met and then married ‘the girl in the red dress’, Jeanne Licari in 1946. After settling in Haverstraw, NY, he opened the Ace Radio store at 40 Main Street, where he sold and repaired TVs, radios, record players, etc.

After raising the kids in a loving, good Christian home and eventually ‘marrying them off’, he and Jeanne enjoyed the ‘empty nest’ for many wonderful years. His advice to ‘young marrieds’ was “to give, and give, and give… and when you’re tired of giving, give some more”. Giving and helping were, well… they were just ‘who he was’.

In 1991, Robert retired from electronics at age 75, celebrated their 50th wedding anniversary in 1996, and sadly lost his beloved Jeannie in 2003. His life since has been full of family, friends and lots of love.

Robert left his earthly home at age 104, and relocated to Heaven into the loving presence of his Lord and Savior Jesus Christ, and to dance again with ‘the girl in the red dress’.

THE DANNA FAMILY KINDLY REQUESTS THAT IN LIEU OF FLOWERS, PLEASE SEND A DONATION TO THE KIDS BRANCH OF MOOSEHEART CHARITIES AT:
WWW.MOOSEHEART.ORG IN MEMORY OF 'LIFETIME MEMBER' ROBERT DANNA.

To order memorial trees or send flowers to the family in memory of Robert Danna, please visit our flower store.