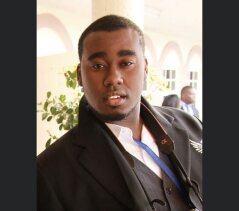 Shaun was born in Montreal, Canada on June 19th 1985 He was the 3rd child of his parent, Esther Martineau. He had a sister, Janice and brother, Terence. At age 6 he started playing Hockey and excelled in playing - he loved the game and everyone cheered him on when he played.
In 1998 he moved to Florida with his mom. They settled in Broward County. He went to Charles W. Flanagan High School in Pembroke Pines and also JP Taravella High School in Coral Springs. After Graduation he attended The Art Institute of Ft. Lauderdale where he studied Web Design. After completing the course He moved to Colorado and attended the Art Institute of Colorado where he obtained a Bachelors Degree in Media, Arts and Animation.
Shaun worked as a freelancer as a Photographer, Graphic Design and Editing.
Shaun became sick with his kidney and was on dialysis for 4 years. In answer to prayer Shaun received a Kidney Transplant in 2014 and was doing well. Last year he moved to Orlando to go back to school and obtained a degree in Editing, Photography and Video Maker and graduated in 2021. He got a job in Orlando but was not what he thought it would be. He decided to move back home and
he immediately got a job at a TV Studio and would have started in the new year 2022 but unfortunately he took sick and ended up in the hospital.
Shaun attended Christian Life Center and got baptized at the beach February 21, 2015 a long side his mom. Whilst living in Orlando he would watch the service online. Shaun lived out his Christianity. He would be the one reaching out and helping his friends. Shaun would bring friends home to visit and some ended up staying for a long visit. He loved to help people. He loved children and would care for his family's children and friends children. They loved to be around him.
Shaun loved his family and friends became family and was happiest when they were family gatherings, eating and have fun and memorable times Shaun loved the times spent with his siblings. When Terrence would visit he picked him up at from the airport and they would go on an adventure together. He took him everywhere he wanted to go sightseeing, eating out and don't forget South Florida tourist shopping destination Sawgrass Mall. One of his friends from high school said he was so kind, funny and "super nice" so giving. Even though he was going through health issues he never complained. Another friend said that they talked about the Lord but it was more of something that we lived and go by. These are the 7 Keys To Life:
1. God First.
2. Love One Another.
3. Never Hate.
4. Give Generously.
5. Live Simply.
6. Forgive Quickly.
7. Be Kind Always.
Shaun loved is camera and used it to capture many "super" memories and special moments. Shaun took wonderful photos and his work was excellent.
These are the words that describe Shaun, caring, giving, loving, kind, very patient, faithful friend - Fruit of the Holy Spirit. Even whilst in the hospital he said to his mom, "Don't Worry" He had faith in his God.
He is reunited with his sister, Janice who went to be with the Lord in 2020. They are together again. He will be missed deeply but we know He is walking streets of gold fully healed and he has finally seen his Savior face to face.
Survived by Mother, Esther Martineau, Brother, Terrence Martineau (who lives in Canada) Nieces and Nephews, Aunts and Uncles, Cousins and many friends in Canada, Trinidad and Florida.
To order memorial trees or send flowers to the family in memory of Shaun Michael Martineau, please visit our flower store.