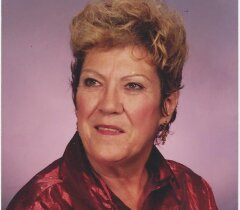 My dear Mom, Shirley was born in Buffalo, New York on 3/12/1934. Her father was William Vogt and mother Barbara Ertel. Shirley had 2 brothers and 2 sisters. She married Ernest Toepfer after his service in the US Army. They together had 4 girls but later divorced after 18 years.

Shirley was independent and was one of the first housewives who chose to work in a factory. She was a hard working individual and on her birthday she made a cake for her coworkers to celebrate her life. Mom was transferred to Omaha, before 2 of her girls finished high school. So off they moved to Omaha, where they enjoyed a good life. Shirley accepted early retirement and moved to her current Florida address, condo, decorated all in blue, as her favorite color.

Shirley is preceded in death by her brothers Donald and Henry, sister Rhea, ex husband Ernie and sadly her daughters Barbara Christiano and Kim Raven.

Shirley was loved by all and did anything she could for all her family She is survived by her loving sister Sheila Vogt Rectenwalt and her husband Charles; 2 daughters Cheryl and Tina; son-in-law Joe Raven; and grandchildren Vincent Raven, Diane Raven, Brandon Toepfer, Samantha Peziner, Cherylann Toepfer and Nicole Toepfer, Frankie Christiano, Daniel Christiano, Briana Christiano Hawkins. Shirley also blessed and loved and boasted about her 12 great grandchildren.

Shirley's favorite things was to go to football games and season ticket for Buffalo Bills. Then she enjoyed watching TV football and a Big Brady fan. Shirley's closest fan was her dog, Jordie, who as little as he was protected her to the end. Shirley loved calls to her and remind her what was on LMN or when Blue Bloods was on. She loved to sneak chocolate treats and going to dine. To all who knew Shirley they all say the same thing, "she was a real sweetheart and helped out all." Shirley did a lot of great things for us all.

Most impressive, was Shirley's independence, kindness and love, that we learned by having her in our lives.

To order memorial trees or send flowers to the family in memory of Shirley Toepfer, please visit our flower store.