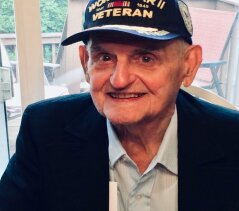 It is with great sadness the family of William J. Mizger, age 95, announces his passing on the 25th of June, 2019 at his home in Coconut Creek, Florida after a brief illness. “Uncle Bill” was survived by many nieces, nephews, family and friends. Anabel Mizger, his wife of 52 years, predeceased William in December of 2008.

William was born in Johnston City, Illinois, and was the last-born son of Charles and Grace Mizger. He was raised in Cicero, Illinois along with his 6 siblings. He lived in Cicero until he relocated to Florida in June 2012. He worked for Western Electric in Cicero and the US Naval Ordnance Plant in Forest Park, Illinois.

William was a United States Navy Veteran of World War II and served in the South Pacific. He was an avid bowler and also enjoyed golf. He will be greatly missed by all.

A memorial service will be held on Monday, July 1, 2019 at Resurrection Cemetery in Justice, Illinois.

To order memorial trees or send flowers to the family in memory of William Mizger, please visit our flower store.