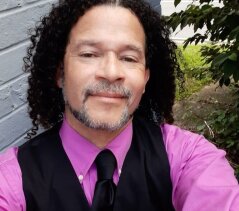 Xavier Eligon Gomez was 58 years old. His date of birth is November 10th 1962. He was born in Bronx, New York. His fathers name is Julio Pagan. His adoptive father's name is Juan A. Gomez and he passed in 1993. His surviving parent is Antonia Eligon Gomez. His surviving brother is Victor Phillip. His 3 surviving sisters are Ximena Mimi, Eujenee Bernadette, and Hazel Celina. He has 2 surviving children, Jessica and Joshua. His date of death was September 6th 2021 at 10:20 pm.

He attended Holy Trinity High School and graduated with Honors diploma. With Music as a major, he took 2 band classes, chorus and theater. He went to Belmont College in Nashville Tennessee. Majored in commercial music and music business industry. He received certifications in Micro-Train programming and Rbase Database Development.

He lived in New York, Georgia and Florida. He moved, from New York, with siblings and parents to Fort Lauderdale. He ultimately moved to Georgia for employment. A versatile person, he worked in many professions, but music and entertainment was his passion. He last lived in Leesburg, Florida where he passed.

Xavier loved people and he loved music. He had this vibrant burst of energy, charisma and dazzling smile, which he applied to his music, performance, and dancing. He was also very funny and was always making good jokes.

In 2010, he formed New Vision Entertainment Services. He was known as DJ X-man. He planned, arranged and performed at weddings, birthday parties, anniversaries, picnics at technical schools, Karaoke sessions at veterans lodges, and Karaoke at night life locations. He used Digital Karaoke as part of his armamentarium. In his past did High School talent shows and March of Dimes for Babies fundraisers.

He loved to entertain people He also loved to cook and feed for friends and the people around him. Anyone who walked into his home or crossed his path was offered his attention and time. He was good at building a loving and caring community around him. Many friends have communicated what a great friend he was and stated that he helped them in times of dire need. He was a good host to all. He knew how to sew and clean. He had an immaculate home.

He was brought up in a home where the Lord was worshipped. His father was a avid Christian and passed his love of God unto his children. Xavier had faith and trust in the Lord. He would give you anything if he thought it would make your day better. Xavier has joined Christ in heaven and we know that there is so much celebration there, as he had here. He is with Christ the Lord.

So I must tell you that Xavier DJ X-man will be missed. He will not be forgotten by those who appreciated his enthusiasm for work and his need to make everyone's day the best they could remember. His infectious smile will remain in our memory. His unselfish deeds will remain in our hearts.

Serenity Prayer - his favorite
God, grant me the serenity to accept the things I cannot change. Courage to change the things I can, And the wisdom to know the difference. Living one day at a time. Accepting hardship as the pathway to peace. Taking, as he did, this sinful world as it is, not as I would have it. Trusting that he will make all things right if I surrender to his will. That I may be reasonably happy in this life, and supremely happy with him forever in the next. Amen. (Reinhold Niebur)

To order memorial trees or send flowers to the family in memory of Xavier E. Gomez, please visit our flower store.